Day 24: The First Day of Spring in Northern Minnesota

Posted on March 23, 2013 by Minnesota Book Awards — Leave a comment

Each day leading up to the April 13 announcement of the Minnesota Book Awards, we highlight one of the thirty-two finalists. Today we feature 2013 Poetry Finalist: 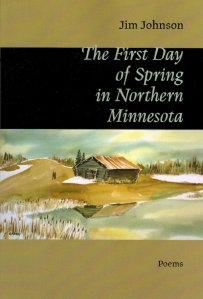 This collection of poems honors what poets, mystics, old country people, as well as plants and animals, have always known—all living things are connected. In the second section, A Good Sauna Always Burns Down, an old man passes this knowledge, as well as the intricacies of marriage, sauna construction, bird song, to a younger man.

The First Day of Spring in Northern Minnesota

I awoke to the cold I did not want to awaken to.
The woodstove opened like a book,
a black book
I would not have otherwise opened. I crumpled
yesterday’s news. The dog sniffed it.

I laid birch sticks
crossways. Thought if our current gods
don’t visit soon
they too will be reduced to heroes and our heroes
forgotten—what then? I lit a match. And waited
for the sun. I noticed at first was a singing. Then
the wind joined in.

When the day broke through the ice
In the swamp,
a deer drank from the pond where the
colors had begun to run. All afternoon
the sun beating on a skin drum. Now
the night, whether cast iron or flames, I am
reminded of churches with stained glass windows
where such light was strictly forbidden, where
night closes like a book. Then
I set the damper down and draw just right. 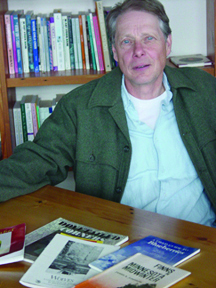 Jim Johnson was the 2008-2010 Duluth Poet Laureate. His poetry is closely tied to his roots in Northern Minnesota and reveals his concern for the natural environment and the people and other living things of the area. He has taught in the Duluth public schools and has conducted workshops in the Upper Midwest. This is his sixth collection of poetry.

Reviews:
“The emotions Johnson evokes are common to the human experience, and his observations suggest the familiar.” — Cheryl Reitan, mnartists.org

“Jim Johnson’s poetry cuts to the core of nature and reflective thought. He often tosses in a lesson or two but his style is far from pedantic, and his humor-speckled prose is best described as wittily insightful yet photographic.” — Marie Loeffler, Verse Wisconsin Online, 2009

Award winners will be announced at the 25th Annual Minnesota Book Awards Gala on Saturday, April 13, 2013 at the Hilton Minneapolis. An author meet-and-greet and book signing reception precedes the awards ceremony, and the Epilogue after-party includes complimentary champagne, desserts, and live music by Reina del Cid and the Cidizens. Tickets on sale now. Click here for more information.

Have you read The First Day of Spring? What are your thoughts? We welcome your comments!