Day 28: Debating the End of History

Posted on March 18, 2013 by Minnesota Book Awards — Leave a comment

Each day leading up to the April 13 announcement of the Minnesota Book Awards, we highlight one of the thirty-two finalists. Today we feature 2013 General Nonfiction Finalist:

Debating the End of History: The Marketplace, Utopia, and the Fragmentation of Intellectual Life by David W. Noble
Published by: University of Minnesota Press

In this provocative study of cultural criticism, David W. Noble explains that modern people assume there will be perpetual economic growth because such a utopian conviction is the foundation for bourgeois culture. For Noble, the related—and relevant—question is, how can the middle classes believe that a finite earth is an environment in which infinite growth is possible?

I am a retired professor of American studies and history. I am near the conclusion of my personal life cycle. As a convert to the belief that the earth is a finite living body, I see the surprising and amusing possibility that the modern belief in an infinite earth that transcends the experience of birth and death also may be at the end of its life span. In this first chapter I will briefly tell the story of how I have moved from modern orthodoxy to unmodern heresy. In subsequent chapters I will talk about my experience with several academic fields where some of my colleagues have come to doubt that universities as modern institutions are in harmony with timeless space… 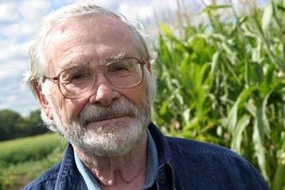 David W. Noble is Professor Emeritus of American Studies at the University of Minnesota and is the author of several books, including Death of a Nation: American Culture and the End of Exceptionalism (Minnesota, 2002) and The End of American History (Minnesota, 1985).

“This is a major book by an important American studies scholar who takes a long view of U.S. and transnational history and culture while making crucial connections to significant contemporary ideas and movements such as neoliberalism and Tea Party politics. David W. Noble makes a compelling case for the continuing relevance of the metaphor of two worlds for understanding the neoliberal disorder around us.” — Shelley Streeby, University of California, San Diego

“An account of [Noble’s] break not just with bourgeois economics but with the progressive mythology of humanity’s forward march out of history into stable societies reliant on endless economic expansion.” — Bookforum

“The greatest strength of this book is the author’s ability to frame his topic around his personal growth and story, which makes readers want to invest in him. I liked that he took an academic subject but applied a great deal of cultural information to liven it up.” — Minnesota Book Awards Judge

“Very well-written in a scholarly style that does not ever become too dense to read. — Minnesota Book Awards Judge

Have you read Debating the End of History? What are your thoughts? We welcome your comments!