Day 27: Curse of the Jade Lily

Posted on March 18, 2013 by Minnesota Book Awards — Leave a comment

Each day leading up to the April 13 announcement of the Minnesota Book Awards, we highlight one of the thirty-two finalists. Today we feature 2013 Genre Fiction Finalist:

Curse of the Jade Lily by David Housewright 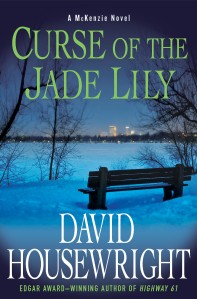 In David Housewright’s ninth novel in the award-winning Rushmore McKenzie crime series, thieves steal the 200-year-old Jade Lily from a Minneapolis art museum and then offer to ransom it back for one-third of its insured value. The only condition is that McKenzie has to be the go-between. And this is no ordinary gem—it’s a jade with a history dating back to the Qing Dynasty and a reputed curse that stories claim has ruined or killed everyone who has over owned it.

Excerpt from Curse of the Jade Lily:

I had been circling counterclockwise around the lake, walking at a brisk pace for no better reason than to keep warm. I hoped Donatucci wasn’t following me. The artnappers demanded that I come alone, and I said I would. I made Donatucci promise that there would be no surveillance of any kind, either at the lake or later when I delivered the money; nothing that would make the thieves twitchy. It might seem counter-intuitive, but I felt I would be much safer without backup than with it. ‘Course, I’ve been wrong before.
…
I was at about the 2.5-mile mark when they made their move, two men coming up fast behind me. I heard their footsteps and turned my head just as the larger of the men knocked me to the asphalt.

David Housewright has worked as a journalist covering both crime and sports (sometimes both simultaneously), an advertising copywriter and creative director, and a writing instructor. He as won both the Edgar Award and the Minnesota Book Award for his crime fiction. He lives in St. Paul.

“Like the other entries in this entertaining series, the book is a contemporary mystery with overtones from the era of classic hard-boiled detectives: the Jade Lily itself, with its perhaps not so mythical curse; the first-person narration; the wonderfully named femme fatale, Heavenly Petryk. Rushmore is a likable series hero, a guy who’d rather be doing not much of anything but who won’t back down from a fight. The book works as a stand-alone, too, so readers unfamiliar with the series can jump right in.” — Booklist

“I found this story engrossing in the best way. I love the art world scene and all of the twists at the end.” — Minnesota Book Awards Judge

Have you read Curse of the Jade Lily? What are your thoughts? We welcome your comments!