Home › Uncategorized › A young man’s self-discovery, a dying woman’s last wish, and a band of misfits trying desperately to be heard.

A young man’s self-discovery, a dying woman’s last wish, and a band of misfits trying desperately to be heard.

Posted on March 29, 2011 by Minnesota Book Awards — Leave a comment

Each day leading up to the April 16 announcement of the Minnesota Book Awards, we highlight one of the thirty-two finalists. Today, we feature 2011 Novel and Short Story finalist:

An excerpt from The House of Tomorrow:

Every single human being is part of a grand universal plan. That’s what my Nana always says. We’re not alive just to lounge around and contemplate our umbilicus. We’re metaphysical beings! Open us up, and there’s more rattling around in there than just brain sacs and fatty tissue. We are full of imperceptible essences. Invisible spectrums. Patterns. Ideas. We’re containers of awesome phenomena! Which is why it’s important to live right. You have to be attuned to what’s around you, and you have to keep from clogging your receptors with crap. According to my Nana, the universe is sending signals every day, and it’s up to us whether or not we want to listen. We can either perk up our ears, or walk around like dead piles of dermis. I always preferred the former. Which is why I found myself up on top of the roof of our dome on that fall Sunday when everything began.

Sebastian Prendergast lives in a geodesic dome with his eccentric grandmother, who homeschooled him in the teachings of futurist philosopher R. Buckminster Fuller. But when his grandmother has a stroke, Sebastian is forced to leave the dome and embarks on a path of self-discovery. This novel tells the story about first love, the power of music and the many places one can call home.

Peter Bognanni is a graduate of the Iowa Writers’ Workshop, and currently teaches creative writing at Macalester College. His short story “The Body Eternal” was chosen by Stephen King as one of the “100 Most Distinguished Stories of 2006.”

“A geodesic dome in Iowa: The House of Tomorrow, as its title and premise promise, marries the visionary with the everyday, the whizbang with the domestic, and does it with beauty, humor, and love for each one of its flawed characters. Peter Bognanni remembers all the romance and awkwardness of teen life and teen music. His first novel is headlong, hilarious, heartbreaking.” – Elizabeth McCracken

“Funny and unique…An honest, noisy, and raucous look at friendship and how loud music can make almost everything better.” – Publishers Weekly (starred review)

The House of Tomorrow is also a finalist for the L.A. Times Book Prize, in the category of First Fiction.

Book Trailer – Wholly original, The House of Tomorrow is the story of a young man’s self-discovery, a dying woman’s last wish, and a band of misfits trying desperately to be heard.

At the March 18th Readers’ Choice Event at Open Book in Minnespolis (hosted by the Minnesota Book Awards, Pioneer Press & TwinCities.com, and The Loft), Peter Bognanni “shyly” eschewed the spotlight of self-promotion and read from a script comprising 5-star reviews of this, his first book, by “completely random, everyday readers.”

Listen:  Peter Bognanni was a guest on Minnesota Public Radio’s “Morning Edition” in March of 2010. He said in writing The House of Tomorrow, he was surprised by how the do-it-yourself ethic of punk rock maps so perfectly with Buckminster Fuller’s philosophy. Fuller told his followers if the world needs something, just go out and invent it.  READ MORE>> or listen to the interview below.

Still want more? Check out this Q & A with Peter Bognanni by Danny McCaslin, March 21, 2011 on Lonely Friday – an entertainment review website aimed at established adults who have careers and families and are looking for something fun to do. (Photo of Peter Bognann by Melissa Copon) 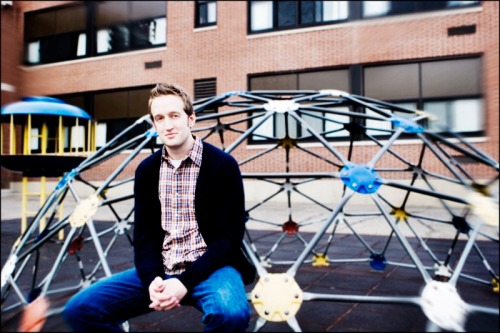 Award winners will be announced at the 23rd Annual Minnesota Book Awards Gala on Saturday, April 16, at the Crowne Plaza Hotel, in downtown Saint Paul. The opening reception begins at 6:30 p.m.; followed by the awards ceremony at 8 p.m. Tickets are $45 and are available by clicking here or calling 651-222-3242.

Each year in the weeks leading up to the Minnesota Book Awards gala, all Minnesotans are invited to take part in voting for the Readers’ Choice Award. Vote online now through the end of March at TwinCities.com. Please, only one vote per person.

Have you read The House of Tomorrow? What are your thoughts? We welcome your comments!