Posted on April 8, 2010 by Minnesota Book Awards — Leave a comment

Each day leading up to the April 17 announcement of the 22nd Annual Minnesota Book Awards, we highlight one of the thirty-two finalists. Today, we feature

An excerpt from an interview with Kate DiCamillo:

“…I literally—and this is one of those things where it’s inexplicable and it also makes you sound kind of strange—I was in New York at a hotel lobby and I had this vision of like a washed up, seedy, desperate magician… I had my notebook with me, ‘cause I always have my notebook with me, and I thought I should just write down the description of that. This magician who has seen better days and is struck with this sudden desire to do real magic. And so that’s where it started, with the magician. And then after a while the elephant showed up. And Peter.

Yoko Tanaka – who did illustrations for this book – has deepened the whole story and made it more magical, more atmospheric, I think, with the illustrations, which are incredible.”

Peter Augustus Duchene is a ten-year-old orphan who is training to be a soldier in the city of Baltese. He was told his parents and sister are dead, but after a visit to a fortuneteller, he discovers his sister is alive. The fortuneteller tells Peter an elephant will lead him to her, which seems a bit silly and improbable at first; however, when an elephant magically appears, Peter vows to take the elephant and find his sister. 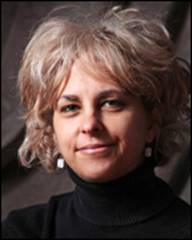 Kate DiCamillo won the 2003 Newbery Medal for her book The Tale of Despereaux. Several of her other books have been renowned, as well, including The Tiger Rising, a National Book Award finalist; Because of Winn-Dixie, a Newbery Honor Book; and The Miraculous Journey of Edward Tulane which won the Boston Globe Horn Book Award. The Magician’s Elephant recently won the 2009 Parents’ Choice Recommended Seal. Kate lives and writes in Minneapolis. Visit her website for more about The Magician’s Elephant.

More with Kate on The Magician’s Elephant at YouTube:

“A fairy tale with nuance. Even the minor characters have a distinct point of view. Beautifully chosen words and phrasing, immaculately edited, and filled with hope… DiCamillo has secured the title of genius storyteller with this book.” – Minnesota Book Awards Judge

“Simply put, a beautiful story. At times a novel, at times a fairy tale, this is a book that you cannot put down!” – Minnesota Book Awards Judge

“Newbery Medalist Kate DiCamillo tells a timeless tale as ‘strange and lovely and promising’ as her title character. The occasional illustrations, too, are dreamlike and magical. In delicate shades of gray, Yoko Tanaka’s acrylics convey the city’s low wintry light and the mood of a place haunted by a recent, unnamed war. With its rhythmic sentences and fairy-tale tone, this novel yields solitary pleasures but begs to be read aloud. Hearing it in a shared space can connect us, one to one, regardless of age, much like the book’s closing image: a small stone carving, hands linked, of the elephant’s friends.” – Mary Quattlebaum, The Washington Post

Award winners will be announced at the 22nd Annual Minnesota Book Awards Gala on Saturday, April 17, at the Crowne Plaza Hotel, in downtown Saint Paul. The opening reception begins at 6:30 p.m.; followed by the awards ceremony at 8 p.m. Tickets are $40 and are available by clicking here or calling 651-222-3242.

Have you read The Magician’s Elephant? What are your thoughts? We welcome your comments!